1.    A riddle in which a fanciful question is answered by a pun.

Its kind of funny. Albert Belle thinks he can coach the Cleveland Indians. Sir, have

you thought what it would be like to coach a team that is full of young blood and new souls? You yourself have claimed it wasn’t “Wedge’s fault,” and that Dolan did this to the team.

But you don’t make sense my friend. Such a foolish remark only to be backed up by you claiming that “You can coach the Indians.” Your kind of like a little bug… yes. You know that one that swarmed the Yankees in the ALDS of 07? What was the name of that again?….. Midge?

You sir are a midge in my book. Right now – the only game plan I have in terms of the Indians is to “bemidge” the midge. Correct me if I am wrong, but you are just a donut eating, smack talking, idiot of a man.

Who doesn’t agree with that?…. Just tell me if you are one to obstruct justice.

I pose a conundrum my friend. One that even you nor I could possibly ponder. For “what is the difference between you and Eric Wedge? One is fired…. And one will be fired if he starts coaching!!

Could that possibly be my friend, Albert? Sorry that I am so punny these days…

“Dolan is getting what he paid for. Every time I watch a game in Cleveland, there’s nobody in the stands. I said, ‘Damn, it’s worse than the old place [Cleveland Municipal Stadium] where we played.’ What do they call that park now, Progressive Field? They should call it Regressive Field. I’ve got buddies in Cleveland who had free tickets to games this season. They told me, ‘We’re not going. Who are you going to watch?’ ” – Albert Belle 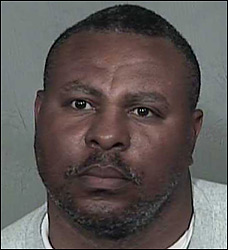 Your cool, to throw down on a team wounded by the scars of lost chances, and tons of mental tears due to long seasons only to be ended at the harsh foot of the Central. You are right, Dolan did do this to the team. But there was a reason. We did “clean house” and that was for a reason. We want to start over fresh, on a new foot, one that we can actually win on. You can use your cruel jokes to take us down another level, but does that make you cool?

The negative output that has been tossed onto this dog pile of a season has really weighed down the front office, but does that give guys like Albert Belle chances to make jokes and cruel statements about our success rate? No! Albert was probably drained by the days when he played where the Indians were “the team” kind of like the Yankees. Albert isn’t used to this hard living baseball economy that we trance around in these days.

Yes Albert, Dolan really has made this team into one of the worst in the league, but he has traded players for the future of the organization. If you look at the ‘Victor Martinez trade’ where we sent him to the Red Sox for Masterson and Hagadone, you don’t really see the “catch” of the whole deal. But see, the organization at whole is one clever four leaf clover, and we don’t do everything so the fans can personally “see it.”

So what I am getting at is maybe we cleared the pathway for Santana at catcher, and maybe Victor was all just a bump in the road of getting there. Go ahead Albert, you can make comments all you want, but in turn – you don’t know your baseball.

You are just a meat head who goes around and says anything he wants these days, don’t join half of the athletes in this crazy world.

It is pathetic to see such an idol de-idolize himself like this.

When you want to talk baseball, make proper comments and don’t flame on your own team. That just makes “you” look bad. You dropped the bomb on the Cleveland Indians, and now the war has begun. Flame on thee, and thou shalt flame on you.

“So Albert – you think you can coach? You couldn’t coach the Yankees from a golf cart in Florida!!!” Try me.